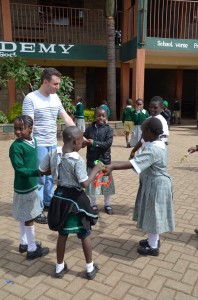 Though Josh’s parents met us nearly 18 months ago, Josh really became acquainted with us just this Spring. Yet in a matter of 3 months he has been on trips with us to Detroit and Kenya. Sometimes when you meet people you just know they will be lifelong friends. Josh is one of those people. He and His Dad joined us in April 2014 in Detroit working to repair and prepare the Klove Hope Center, then in June 2014 Josh joined us again in Kenya as a member of the Summer trip and was a great help in the school and with Children’s ministry. Get to know Josh a little better in his own words:

In January 2013 my parents met Pastor Janney and Lisa on the K-LOVE cruise, and came home excited about World Hope.LaterI would hear about Word Hope and their work in Detroit on my local KLove radio station. About a year later God put it on my heart to take part in a missions trip within the US. This was something that I had been hesitant to do for awhile, but felt that God’s timing was too perfect to be passed up on. I went on my first trip with World Hope to Detroit in April of 2014. We spent a wonderful week working on the Hope Center in Detroit and I wanted to continue doing more. While I was there I got to hear about all the wonderful things going on in Kenya. I had never thought I could travel overseas to a third world country, that just was not in my realm of possibilities. After talking to people who had been on the trip before I began to think that it might be something I could do. The day before we left for Kenya I remember thinking that if anyone had told me a year, or even 5 months, earlier that I would be going to Africa on a missions trip I would have told them they were crazy. And yet, there I was ready and excited to embark on a big trip to a new part of the world, eager to see what God was going to do thousands of miles away. There was not a moment I did not feel at home in Kenya. The people there are the most hospitable and welcoming I’ve ever met and so full of hope and love, even when by our first world standards they were struggling. What struck me the most about the trip was not all of our differences, between me and other members of our group or between our group and the Kenyans we met and loved; it was the uniting love of Christ that bound us all together. Suddenly our differences didn’t seem to matter at all. I am forever changed because of the people I met and the awesome ways I got to see God at work. I have been greatly inspired by the deep level of faith and hope I encountered. I’m looking forward to the day I can return again!