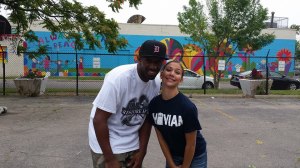 Through multiple trips to Detroit this year World Hope Had the privilege of meeting a young girl named Faith. She is creative and unique and has a very special way with people. On our trips students and adults alike are drawn to her. Please learn a little more about Faith’s story of Hope here:

Who is Faith Dell:

Faith: I am a christ follower…I’m in 8th Grade… Gosh I’m boring now that I think about it. Im homeschooled, but I am properly socialized. I have a younger brother named Gabe and we live with our parents in Michigan.

Do you have a verse that is significant for this point in your life? Why is it significant?

I heard this is a For King and Country song, and it reminds me just to love.

Faith: My family and I went on a K-love Cruise and saw the Revival of Detroit booth. My Dad shared with Lisa that he was a Chiropractor. World Hope needed a Chiropractor to go to Kenya that year, however our entire family couldn’t go. Then we found out about the work in Detroit just an hour from us, so we all went on our first trip.

What is your experience with missions?

I went on a trip to Flint with my youth group from church before. Now I have been to Detroit in April and July of 2014 and I interned on the trip to Detroit in September of 2014.

How did your idea of Detroit differ from what you actually saw?

I Didn’t really think about it a lot before I went. I had only been to Detroit for concerts and things. Meeting people from Detroit helped a lot. I had grown up hearing it was a pretty dangerous place, but there are spots where it is ok to go. The building was way bigger than I could have imagined and I didn’t expect people to be as loving, or to become so close with the people there.

What are your next steps?

I’d love to Get a job with World Hope, wherever they need me, I could see me in missions work, going to Africa in the future.

Below you will find a paper written by Faith Dell for a school project. Hear about Detroit in her own words.

Hope can Change Everything

In April of 2014, I went to Detroit to work with a group called World Hope. They build what they called “Hope Centers”. That is a facility where they have food, clothes, a church and a school available for the less fortunate people. When I went there, I met so many amazing people who just had the heart to help those in need. Some of the people I got know are Jerel, Ashley, Tyman or T, Uclesha, and Lisa. All of them are great people, who love to serve.

While I was there my Mom we were bagging up leaves and cleaning a parking lot. I noticed a group of people standing in a circle, arms around each other and they appeared to be praying. I asked my mom what was happening. She told me that they were going evangelizing. I wanted to go so bad. My mom took me over to the groups that had started dividing up and we picked a group with “T” and “Deacon Bobby”. As we walked down the road that had very old, run down and strangely beautiful houses my heart was beating with excitement. The first house we went to, the door was opened by a very angry elderly woman with an afro. She was irate at being woken up from her afternoon nap. The second and third houses were either abandoned or no one was home. It’s hard to tell sometimes. As was neared the fourth house a silver Impala pulled up to the curb. The car was rocking from the loud rap music playing, the driver was barely visible, his seat was very far back and he had a hat pulled low. Deacon Bobby approached the car and spoke to the man for a moment. He then called me over to meet the driver, Byron. Byron was hard to understand when he spoke and was very cautious. Deacon Bobby started telling Byron about how Jesus died for our sins. He asked Byron if he died today, would he go to heaven. Byron said he was still working on it. Deacon Bobby asked me to pray with Byron and lead him to Christ. I was terrified. I thought for sure I was going to mess it up. God is bigger than me and gave me the words to speak.

It was in that moment that I knew what I wanted to do with my life. I want to spend my life helping those in need. I want to travel to the places of the world that need hope and give them that. On September 23rd I had the privilege of going and staying with a woman named Ashley for a week in Detroit.  A group from all around the United States came to get the building ready. We prepared the Hope Center for its grand opening, September 28th. It was a great trip and I loved getting to know everyone.  I am looking forward to continuing to do more and change more lives. The trip made me realize that it’s not always about us. I always knew this but my eyes were really opened to the needs of others and how thankful I need to be. I also learned that hope shines brightest in the darkest places.